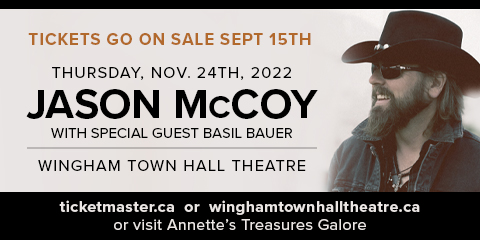 Join Canadian Country music star Jason McCoy on November 24, 2022 at the Wingham Town Hall Theatre for a personal and interactive performance. Opening the evening for McCoy is special guest, emerging artist Basil Bauer. Tickets are $59.50 and go on sale Thursday, September 15 at 8 AM.

As a 25-year veteran of the entertainment industry and two-time CCMA Male Vocalist of the Year, Jason McCoy appears to be the king of reinvention. Growing up in the small town of Minesing, Ontario, Jason admired the well-rounded artistry of classic entertainers Roger Miller and Johnny Cash to Merle Haggard and Glen Campbell. So, armed with a guitar and a dream, Jason set out at 19 to follow his path to stardom.

As a Country Music Artist, he’s racked up multiple CCMA and CMA awards and a Gold album. As creator and frontman of the highest-selling band in Canadian Country Music history, The Road Hammers, Jason took on the Country Rock genre. He guided the band to unprecedented success throughout Canada and the United States, picking up a platinum album, CCMA Band of the Year award, and a Juno along the way, but music is only part of the story; ever engaging and entertaining, Jason has become a popular host on many fronts. From voicing the nationally syndicated Country Radio show ‘Sounds Canadian’ (2007-2010) to stepping in front of the camera.

Jason McCoy is the host of Smashtown (CMT Canada/USA) and two seasons of CMT’s Pet Heroes (2010/2011). The release of the album ‘Everything’ marked Jason’s first solo studio album since 2001 and spawned the top 10 hits, ‘She’s Good for Me, ‘ and the title track ‘I’d Still Have Everything. Jason continues to write and record music and prizes his time with his wife and two children at their home farm, just two miles from the small town of Minesing, where it all began.

Tickets for November 24, 2022, at the Wingham Town Hall Theatre in Wingham, ON, are available online at www.ticketmaster.ca or by phone at 1-519 -912-1515; you can also purchase tickets in-store at Annette’s Treasure Galore at 206 Josephine St, Wingham, ON.